“While the long-vacant lot at 307 Sherbourne St. is slated to eventually house a rental apartment building, developer Oben Flats is working to ensure the land is not wasted while they await approvals.” Inside Toronto

On Saturday, September 26th, 2015, Oben Flats in partnership with public art and community engagement organization, The PATCH Project, and local resident and urban planner, Danny Brown, will unveil a large mural at the long-vacant lot at the southeast corner of Sherbourne and Gerrard.

The painting of the mural is just the first in what Oben Flats, a private developer, intends to be an ongoing program of community-oriented events and activities hosted on the site that could include a skating rink, pollinator garden, and temporary market. They hope to work with other partners including the David Suzuki Foundation and the local community, to green the site and brainstorm other ideas while they seek planning approval from the City of Toronto for their residential development proposal on the site.

“The site’s been vacant for too long. Until we’re able to begin construction, we see an opportunity to connect with the local community and make the space available for more beneficial uses than growing weeds and collecting litter”, says Julian Battiston, President of Oben Flats.

Oben Flats credits urban planner and community member, Danny Brown, with kickstarting the campaign. Danny was asked to collaborate with Oben Flats to design an interim intervention strategy after hosting a guerilla beautification event on the site as part of Evergreen Canada and United Way Toronto’s 100in1Day event.

“Having worked with Oben Flats over the past couple of months, I’m thrilled to see a developer so excited and committed to voluntarily supporting the neighbourhood before their proposal even has the ‘go-ahead’ from the City”, says Danny.

Oben Flats, The PATCH Project, and Danny invite community members to stop by 307 Sherbourne Street in the afternoon on Saturday, September 26th, to have a bite to eat, watch the mural being unveiled, and share their ideas for temporary uses for the site.

Oben Flats is a progressive development firm, which is currently constructing a high-end rental apartment building in Leslieville and developing several more contemporary rental projects across the city.

The PATCH Project installs permanent and temporary art in underused spaces, like construction sites, that strengthen community ties, and beautify the streetscape while building the capacity of emerging artists to exhibit in the public realm.

Danny Brown is an urban planner at Urban Strategies Inc., a global urban design and planning consultancy based in Toronto, and local resident. 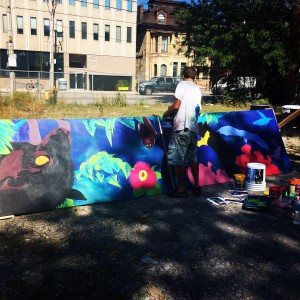 The Bowery Project at Oben Flats

How to Spring Clean